In Aid Of Leukaemia 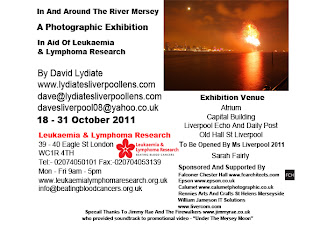 Posted by liverfocus at 12:36 No comments:

It gives me great pleasure to say that
The Right Worshipful the
Lord Mayor of Liverpool ,
Councillor Frank Prendergast
will visit my exhibition
31st Oct 4pm
Posted by liverfocus at 11:13 No comments:

A Photographic Exhibition In Aid Of Leukaemia Research
www.leukaemialymphomaresearch.org.uk 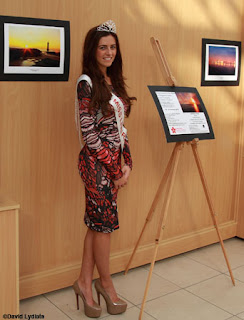 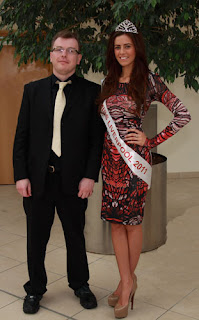 Posted by liverfocus at 05:54 No comments: 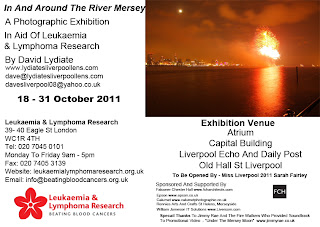 A Photographic Exhibition In Aid Of Leukaemia Research

Introduction
The objective of this exhibition was to represent Liverpool’s Year Of The Sea, with the variety of subjects that can be seen in and around The River Mersey.

Variety is added to the project with different types of Sea vessels, as well as past and present features of The Albert Dock and The Pier Head.

Subjects will include, The Tall Ships Parade Of Sale 2008, the cruise liners various Maritime Topics and a variety of landscapes

Iconic Architectural features will be included as part of the exhibition, such as the “newly” developed Pier Head including The Museum Of Liverpool.

This exhibition will show how Liverpool has embraced past with present
The exhibition will celebrate  Liverpool’s modern landscape including a view of Liverpool's Waterfront taken from The Liverpool1 shopping complex in Chavasse Park.

In 2004 I was diagnosed with and fought a rare and deadly form Of Leukaemia, I fought this Illness again in 2007. The form of Leukaemia I had was Acute Myeloid leukaemia (AML), also known as acute Myelogenous Leukaemia. I have also lived with Multiple Sclerosis for 10 years.
I have three passions in Life. Liverpool, Photography and raising awareness and money for Leukaemia Research. Liverpool is in my heart and has been my inspiration.

2011 In And Around The River Mersey - A Photographic Diary

The Albert Dock and surrounding features, have always offered something different every time I visit. A view of The Liverpool Echo Arena wheel was taken in early January. 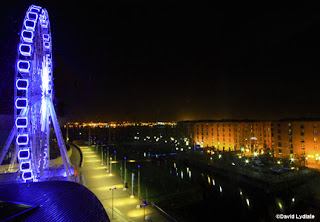 A Green lazer was depicted 17th Febuary, viewed from The Albert Dock(my back was facing the Edward Pavilion), this view from the Albert Dock featured The Iconic Anglican in the background. The lazer formed part of a project between Fact Cinema  And Tate Gallery Liverpool.
It was quiet a difficult project because I had to wait for the moment when clouds had finished passing over a full moon, to capture the Atmosphere of that paticular evening. 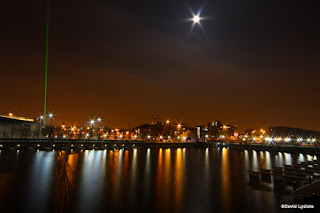 HMS Liverpool was depicted 24/2/11 on her final visit to the city, it was also interesting to view The Cityscape from The River Mersey,  depicting how newer structures such as the Liverpool Echo Arena and skyscrapers have been built alongside the traditional iconography such as the three graces and the two Cathedrals. The Museum Of Liverpool will pay homage to Liverpool’s glorious past, this is another “recent” iconic structure built on the Waterfront. Yes of course Liverpool is a attractive modern city, but the city is still Liverpool. 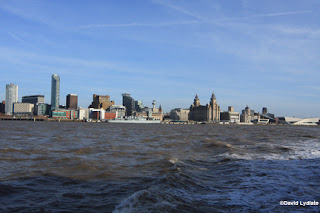 Liverpool Cityscape. HMS Liverpool can be seen central but towards the left.

The waterfront was depicted from Woodside, I started taking one picture while it was still dusk, by the time the exposure was finished the sky was black (see A3 enlargement in exhibition).
In March a full moon) was depicted over the Liverpool Waterfront from Wallesey. It was the closest the moon has been to earth for 200 years, it was truly amazing. The sun had set in Birkenhead, and appeared to have risen in Liverpool within minutes, but this was the moon, with a magical glow. Lots of families had made the effort to go out and watch it, you would think a special event was going on, but this was the moon. That night nature was putting on it’s own special show, Liverpool’s waterfront provided the perfect backdrop. Seei exhibition for these images

New Brighton provided me with a great variety of subject matters as did Hale. I took the Cityscape using New Brighton beach in the foreground, and Seaforth Dock. Hale lighthouse was depicted, the visit to Hale give me a lot of inspiration. I viewed the diverse amount of subject matters across the River Mersey when visiting Hale. On one side of Hale I could see the sun setting over Liverpool Airport, on the other side of my view I could see the Runcorn Bridge and an industrial landscape with the River Mersey prominent in each angle, another visit was planned to Hale later in the year. Various ferry cruises were made in April, the HMCS Athabaskam was depicted. 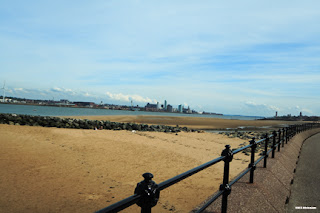 I used May as a month for thinking time, I needed to add more variety to my work. This exhibition was my first conceptual project. I thought carefully before I made my next “move”.
Of course the charm of going on the Mersey Ferry during May is something I continued with.
It was important to have my main plan for the year, but I always think ahead.

June
A return trip to New Brighton was made, with the objective to capture Fort Perch Rock Castle and The Lighthouse, a sunset was also captured behind Fort Perch Rock Lighthouse. I continued to Photograph the Pier Head, but never added these shots to my main selection until I was happy with the amount of variety the exhibition would have. I had my planning interview for this exhibition in June. 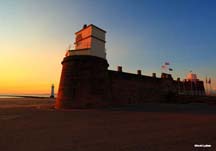 July
A visit to the Waterways Museum in Elsemereport was made, I depicted the Canals etc and found it to be “a step back in time”, as the weath of history of Canals was brought to my attention. 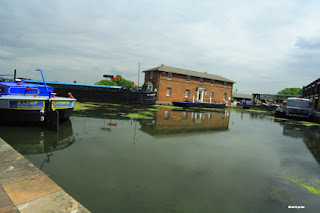 Scenes from a 3hr Mersey River Cruise were depicted. Various photographs were taken of The Pier Head. I think the Museum of Liverpool is the best example in the world of how a city’s history and culture could be brought to life to a 21st century Audience. 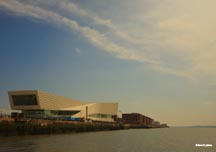 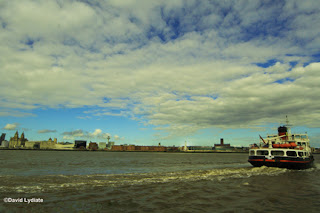 Images above, Museum Of Liverpool, Taken from River Mersey (Smaller Image)
and just above Royal Iris Ferry Boat/Liverpool Cityscape
﻿
Sept
As part Of The On The Waterfront Events and The River Mersey Festival,
I depicted The Queen Elizabeth, The Queen Mary and Power Boat Racing across The River Mersey.
Views of the River Mersey were captured from Halton.

Liverpool Will Always Be My inspiration

A Photographic Exhibition
In And Around The River Mersey

In Aid Of Leukaemia Research

Posted by liverfocus at 02:45 No comments: